During the late 1960s and throughout the 1970s many studies were conducted to investigate the effects of TSH on adenyl cyclase.

At this time it was commonly held that polypeptide hormones such as TSH produced many of their cellular effects by stimulating adenyl cyclase, thus increasing intracellular cAMP levels (Wolff & Jones, 1971; Wienand and Kohn, 1975). cAMP was, in turn, thought to exert its effects by activating protein kinases.

Fluoride had been found to be an activator of adenyl cyclase in many tissues, and investigators now used fluoride to learn more about TSH. These studies brought firm evidence that fluoride not only acted like TSH, but fluoride-stimulated cyclase activity could be many times higher than the optimal TSH stimulation, especially in carcinomas.

As research continued, numerous investigations showed that – although fluoride was able to activate adenyl cyclase in homogenates in thyroid slices – it did not increase cyclic AMP levels as expected (i.e Zor et al, 1970), yet it produced the same effects as TSH. This finding led researchers to believe that TSH and fluoride effects, although identical, must have been obtained by different mechanisms (i.e Yamashita & Field, 1972). Research in the 1990s then brought evidence that TSH activated two G proteins at low levels – G(s) which stimulates adenyl cyclase, as well as Gq/11, which activate phospholipase C and are the calcium-transducing G proteins (Allgeier et al., 1994).

The discovery of G-proteins and the application of fluoride as the “universal G protein activator” brought much new knowledge to the field of signal transduction. The human TSH receptor was found to be the only known natural universal G-protein activator able to activate all four G protein families (Laugwitz et al, 1996). It was established that TSH-activation of adenyl cyclase was absolutely dependent on the regulatory G proteins (Totsuka et al, 1982, Utiger, 1996).

While many pro-fluoridation organizations and dental groups claim that the amounts of fluoride used in the TSH in-vitro experiments were 100 to 1000 times higher, and “such levels could never be obtained in humans”, they fail to realize that these experiments were made in isolated environments – specifically to investigate adenyl cyclase. TSH levels used in those experiments were also much higher than is ever found in humans. In the system, when other nucleotides are present, fluoride will  – just like TSH – activate adenyl cyclase at low concentrations, while inhibiting same at higher concentrations. This bi-phasic action is time-dependent and tissue-specific (see Jenq et al., 1993; Cohen-Luria et al., 1989).

Addendum 2020: Much higher doses are used in in vitro experiments because the levels of TSH receptors are much lower than they ever are in vivo. TSH receptor levels in the thyroid are 100-fold higher than in vitro (Boutin et al., 2020). The effects of TSH are dependent on TSH receptor expression and occupancy.

At slightly elevated TSH levels Gq/11 pathways are activated. Pathways downstream from Gq/11 activation are at the core of fluoride poisoning.

Kendall-Taylor P – “Comparison of the effects of various agents on thyroidal adenyl cyclase activity with their effects on thyroid hormone release” J Endocrinol 54(1):137-45 (1972)

Malkiewicz-Wasowicz B, Gamst O, Stromme JH – “The influence of changes in the phospholipid pattern of intact fibroblasts on the activities of four membrane-bound enzymes” Biochim Biophys Acta 482(2):358-69 (1977)

TSH – Short for thyroid-stimulating-hormone, also called thyrotropin, secreted by the anterior pituitary gland; activates adenyl cyclase (cAMP production) in thyroid cells leading to production and release of the thyroid hormones (T4 and T3). The TSH-receptor is the only G-protein-coupled receptor able to activate all G protein families, an activity directly mimicked by fluoride.

The graphs below were extracted from the study done by Wolff and Jones (1971), documenting the largely identical effects of fluoride and  TSH levels on the inhibition of adenyl cyclase in purified bovine thyroid plasma membranes (G(i) proteins): 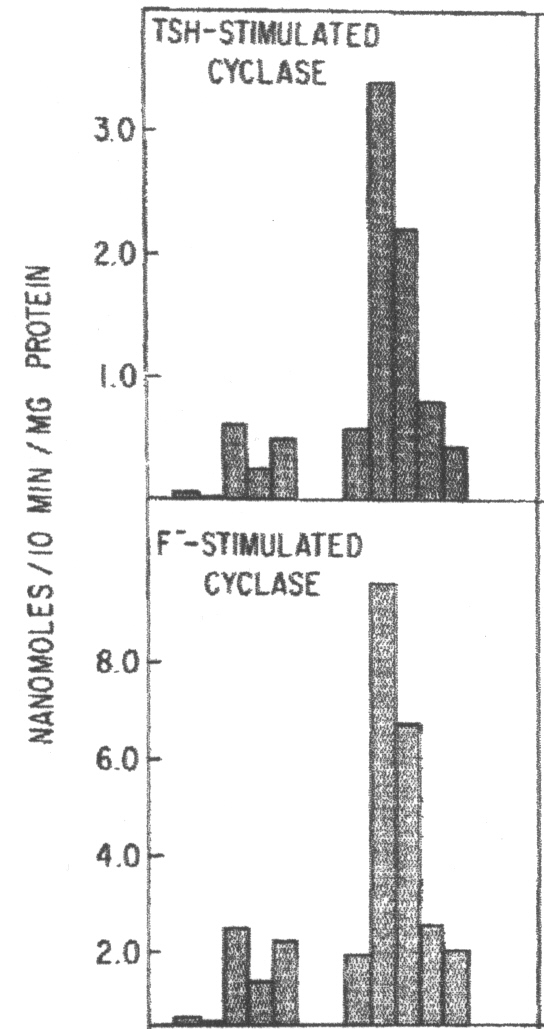 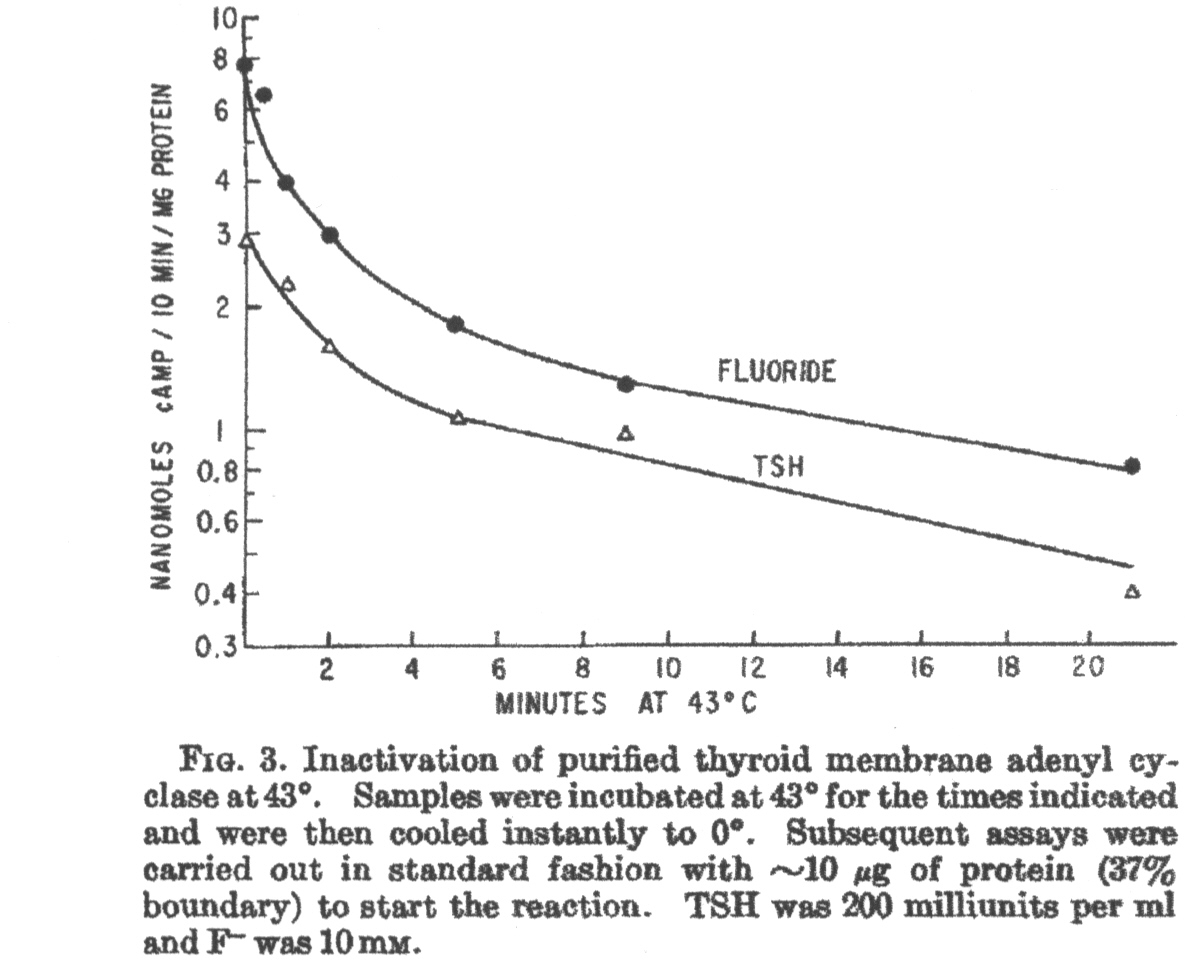