Excessive iodine intake is becoming a serious problem for children all over the world.

Data from Canada indicates that almost 40% of children aged 3-5 have excessive iodine intake. The majority of children 3-11 consume too much iodine. 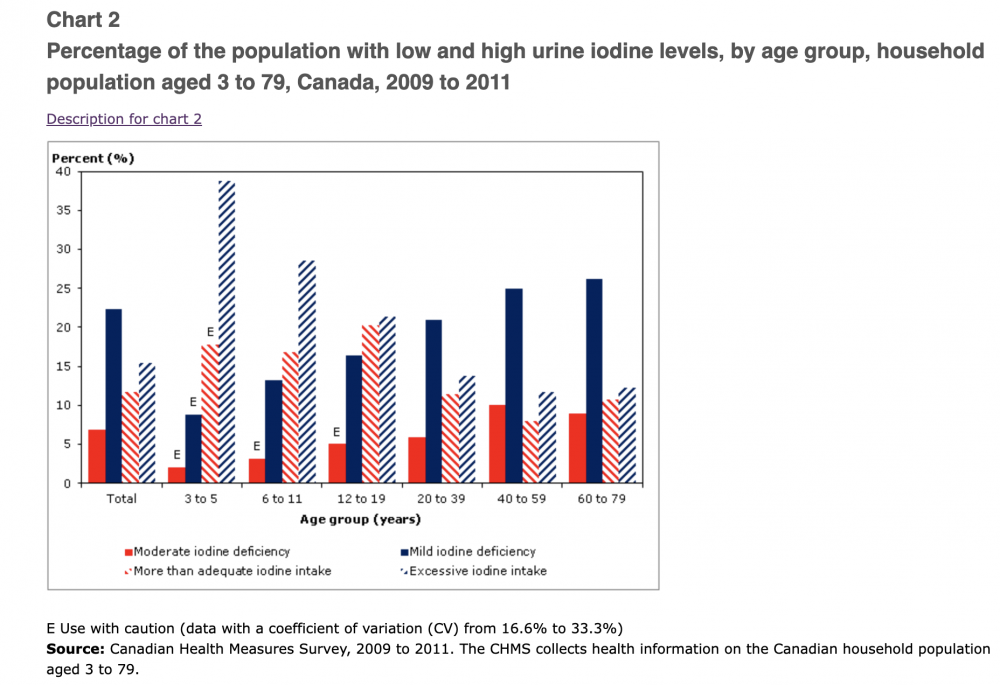 Another look at the data - from the Iodine Global Network: 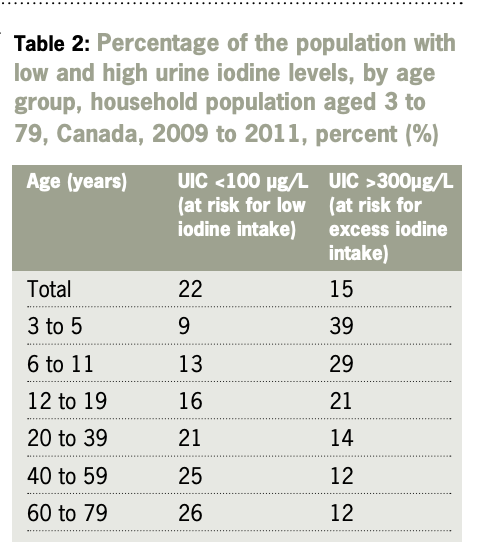 This is a great problem that no one is talking about. Fluoride and iodine have many interacting effects - the mottling of teeth is just one of them (dental fluorosis). The severity and degree of fluoride toxicity depend on the individual's iodine/thyroid status.

It is imperative that public health agencies and researchers worldwide start paying attention to the large body of scientific evidence that has been published over the last 150 years on the effects of fluoride on iodine and thyroid hormone metabolism.

Iodine Excess in US Children

Similarly to Canadian children, 40% of US children between the ages of 6 and 8 now have excessive iodine intake (Juan et al., 2015). (Data for children <6 years is not available.)

The rates are higher for boys than girls.

NOTE: So far (2022) - none (!) of the ELEMENT studies conducted on fluoride/IQ/Adverse Birth Events have investigated the iodine intake in the pregnant women or their offspring. ELEMENT studies were done in Mexico City.

"According to the Iodine Global Network, Mexico is considered a country with adequate national iodine intake (297 mg/L), but some regions have not been studied. We aimed to evaluate urinary iodine concentration (UIC) and its association with thyroid stimulating hormone (TSH) levels and the nutritional status in 307 children (aged 5 to 11 years) from three elementary schools of Monterrey, northern Mexico. UIC in spot urine samples and capillary TSH levels were measured to assess thyroid function, in addition to weight, height, body mass index (BMI), and waist circumference (WC). We found a median UIC of 442 mg/L and a significant association between UIC and TSH levels by logistic regression when data were adjusted for (1) age and sex; (2) age, sex, and WC; and (3) age, sex, and weight status. UIC values were higher in 7-year-old children compared to 11-year-old children. High prevalences of overweight/obesity (41%) and WC >90 pctl (22%) were observed. This study identified higher UIC levels in children than those previously reported in the country. The UIC showed a positive and significant correlation between TSH levels in the three models evaluated. More studies are needed to assess the causes and possible outcomes of high UIC levels."

"Excessive dietary iodine intake was established in 31.4% of all volunteers according to their UI, placing them at risk of thyroid dysfunction."

"Median UI was 267 μg/L, (IQR 161.3 - 482.5)....in spite of our study's limitations, the frequency of autoimmune thyroiditis is clearly elevated in the studied population. Further studies are necessary in order to define the prevalence of autoimmune thyroid disease as well as the current iodine nutritional status in our country."

"In Latin America, the situation appears to be different since there are several reports reflecting a tendency toward excessive dietary iodine intake since the publication of ThyroMobil in 2004. Chile, Ecuador and Brazil were reported to have a median UI > 300 µg/L, although Chile was an exceptional case since 100% of individuals had a UI > 300 µg/L (median 540 µg/L). Venezuela, Paraguay, Honduras and Peru had UI levels between 200 and 299 µg/L, reflecting a more than adequate dietary iodine intake. Of the 13 countries studied, more than half had an excessive iodine intake (29). The ICCIDD regional coordinator’s for Latin America last report showed that after studying 22 countries, 13 had a median UI > 200 µg/L but in 8 countries, a national survey had not been conducted within the previous 8 years and among these, was Mexico (30). Other non-nationwide studies conducted in the region have shown the same tendency, including Colombia (31), Brazil (6) and Peru (32). This predisposition to excessive iodine intake in our region may possibly increase the rates of autoimmune thyroiditis and hypothyroidism in our populations; although there are few studies investigating the prevalence of these problems in the region, it seems this is occurring, as suggested by publications from Brazil (6,7,14,19) and Chile (33)."
Top
Post Reply
3 posts • Page 1 of 1