A few months ago we stumbled upon an article by Ken Perrott, posted on the ResearchGate website. We found it because the author, in his document, had provided a hyperlink to a study that is hosted on our website (Lin et al., 1991).

Apparently, the author is the "Science Advisor for Making Sense of Fluoride, Inc., an Australasian group of academics, scientists health specialists and students which works to counter misrepresentation about community water fluoridation." (Health Central NZ, 2018).

In the article, the author made an attempt to discredit the many papers that had appeared in the last few decades documenting the adverse effects of fluoride on IQ. While there are certainly problems with quite a few of the IQ studies, we noticed right away that the author appeared to not only have a limited understanding of fluoride toxicology but that he also misrepresented crucial studies.

For the purpose of this post, we will look at the paper that the author had hyperlinked to our PFPC website, a study published in 1991 and conducted by researchers at the Xinjiang Center for Disease Control in China.

Perrott wrote the following about this study:


This was basically a study of Iodine deficient children and very few details are reported (the article is a one-and a half page [sic] note in the Chinese Iodine Deficiency Disorder Newsletter). It is basically an iodine deficiency study and the fluoride levels are irrelevant.


This statement is simply false in all aspects as anyone familiar with the work can easily verify.

1) The study was published in the Chinese journal "Endemic Diseases Bulletin", the official journal of the Xinjiang Center for Disease Control. It is a highly-rated journal in China, publishing research on endemic diseases such as fluorosis, iodine deficiency disorders, malaria, Keshan disease, and is considered a core journal in the field of parasitology. The journal was renamed the "Bulletin of Disease Control and Prevention" in 2005 (Chinese Preventive Medicine Association, 2021).

2) The paper is 6 pages long (not that it matters any) and - although written in Chinese - features tables depicting details of the study results in English.

3) Subsequently, an English translation of this study - minus the tables - was published in the Newsletter of the International Council for Control of Iodine Deficiency Disorders (ICCIDD), the global organization dedicated to the elimination of iodine deficiency. [The ICCIDD was renamed "Iodine Global Network" (IGN) in 2014].

Lin and colleagues worked at the Xinjiang Institute for Endemic Disease Control and Research, conducting research on fluoride and iodine deficiency disorders for well over 10 years. Their work led to the evaluation and use of reverse T3 (rT3) as a biomarker in fluoride poisoning (Lin et al. 1991, 1992, 1986).


WHAT DID THE STUDY REPORT?

This particular study was a 3-year examination of 130 children aged 7-14 years, conducted between 1987 and 1989, with funding provided by UNICEF. The study was conducted to evaluate the incidence of sub-clinical cretinism in areas with low iodine and "high" fluoride intake.

The study compared two iodine-deficient (IDD) areas with "normal" fluoride (0.34 ppm) to a third one that was considered to have "high" fluoride (0.88 ppm), and a fourth one where iodine supplementation had taken place.

The study found that fluoride at the "high" water concentration of 0.88 ppm could significantly exacerbate the effects of iodine deficiency. Fluoride greatly increased TSH and rT3 levels while reducing T4 and T3 levels, increased the uptake of radioactive iodine, retarded bone age, and further reduced IQ.

It is patently absurd to claim that fluoride levels were "irrelevant" in this study by Lin et al., as proclaimed by Perrott.

The fact that rT3 levels increased was a clear indicator that fluoride affected the activity of the deiodinases - (D1, D2, D3 --> enzymes that convert T4 to T3) and that effects were caused by events OUTSIDE of the actual thyroid gland, as the thyroid itself only secretes minimal amounts of rT3.

rT3 is of crucial importance in fetal thyroid hormone homeostasis.

Since the work done by Lin et al., other researchers have also found rT3 levels as an appropriate biomarker in fluoride poisoning in humans (i.e. Shashi & Singla, 2013 a,b).

The deiodinases are under the control of TSH, the thyroid-stimulating hormone - levels of which are increased even at small elevations of fluoride in water supplies - and at concentrations below those used for community water fluoridation (Kheradpisheh et al., 2018).

It is unfortunate that both anti- and pro-fluoridation groups remain largely ignorant on the actual toxicological properties of fluoride, particularly as it relates to its effects on thyroid hormone metabolism.

It is disturbing to see that landmark studies such as the one by Lin et al. continue to be misrepresented by advocates of fluoridation programs, and especially those who claim to "counter-act misrepresentation about community water fluoridation", such as Ken Perrott and Juliet Guichon [see: viewtopic.php?f=91&t=3697 ].

Shashi A, Singla S - "Clinical and Biochemical Profile of Deiodinase Enzymes and Thyroid Function Hormones in Patients of Fluorosis" Australian Journal of Basic and Applied Sciences 7(4): 100-107 (2013b)
http://poisonfluoride.com/phpBB3/viewtopic.php?t=552

The information below is taken from an exchange on Twitter between Ken Perrott and the PFPC. The reader is encouraged to see the original thread. Links are provided below.

1) Notice how Perrott continues to state that it is a "brief poorly written 1 and half page article in a Chinese newsletter".

2) Notice also how he now provides a link to the paper on his own website, instead of the PFPC site - which he did in his "review" on ResearchGate. 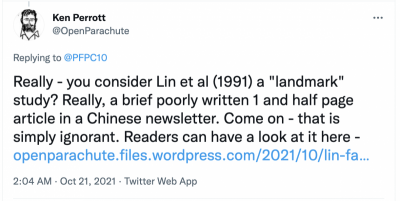 Here is the second response by Ken Perrott, posted on his own Twitter page.
The image from part #5 did not translate in the screenshot. It is posted separately below. (It is the same false statement as is addressed in our original post.) 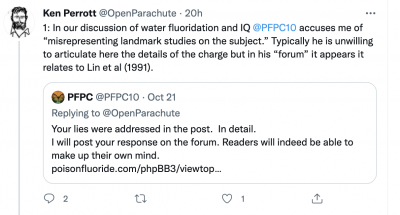 1/
Wrong again. As much as you'd like to make this about water fluoridation and IQ, my post was about the fact that they are 650 studies on fluoride effects on the thyroid. Loss of IQ is only one concern. I did not mention CWF - that was already pointed out to you before.

Your "short" paragraph misrepresented the paper by Lin et al. entirely. As already stated, your claim that "fluoride levels were irrelevant" is a blatant misrepresentation of the study results. No other way to describe it.

The Lin paper was a landmark study because it was the first study to document fluoride effects on rT3 levels. This was important for two reasons:

1) It showed that the toxic effects of fluoride on thyroid hormones occurred OUTSIDE the thyroid gland, via deiodinases.

2) It provided new options in the treatment of fluoride poisoning. For example, some of us were able to greatly reduce symptoms by using small amounts of selenium (an essential component of deiodinases). Others used Vit A which reduces TSH.

Your ignorance on this matter really shows, as evidenced by the derogatory "landmark" comment. All you can do is bring up CWF and IQ again, which is NOT the topic of discussion. That the study is not brought up in some of the IQ papers is indeed alarming.

Not accounting for iodine/thyroid status is a major shortcoming of many of the fluoride/IQ studies. Thyroid hormones are essential for brain development. That's why there are worldwide efforts to reduce iodine deficiency. Learn about it.

We are not associated with FAN/Connett. Why do you keep bringing up FAN or Connett or your debates? Unfortunately, Paul Connett also appears to have a very limited understanding of fluoride toxicity, as it relates to effects on thyroid hormone metabolism.

For anyone to exclude a study "because it is complicated by iodine levels" is troubling. There are now 650+ studies on the fluoride/iodine subject. I also note here that you did not respond to my comments concerning the high iodine levels in the Ibarluzea study you cited.

Readers will indeed make up their own minds. This very paragraph and its false statements are discussed in detail on our site, with ALL supporting documents.
https://tinyurl.com/8ufhst9b

7/ If you have exposed anything, it is your ignorance on the subject. As far as your "honesty" is concerned - how long will you continue to claim that fluoride levels in the study by Lin et al. were "irrelevant"?
Last edited by wendy on Fri Oct 22, 2021 4:13 pm, edited 5 times in total.
Top

Here is a notification by Ken Perrott that he has "no interest...debating an anonymous person who won't reveal a professional background or identity. That us [sic] just bizarre."

This is AFTER he was provided with a link to the original Lin paper, as well as one to the ICCIDD/IGN - the organization that published the English translation of the Lin study in their 1991 newsletter. 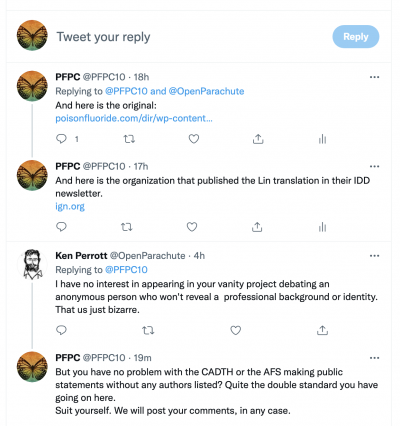 Re: Ken Perrott's misrepresentation of the study by Lin et al., 1991 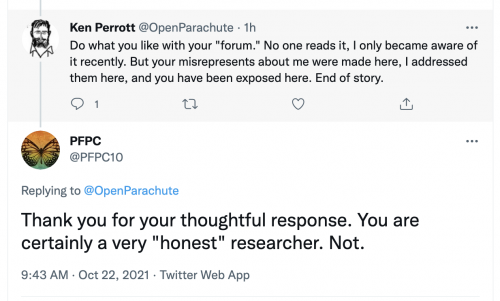 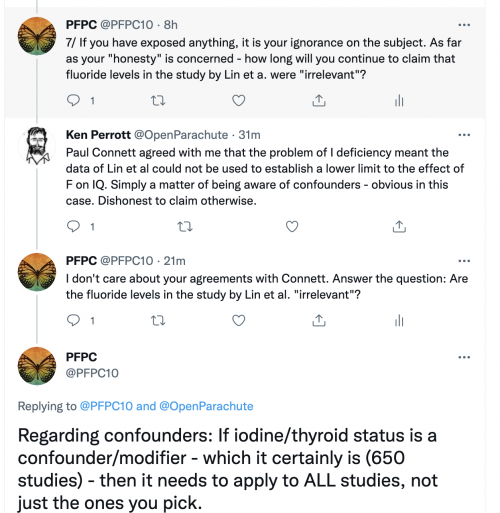 It is now abundantly clear that "dishonest" Ken Perrott has no intention to address the issues raised in a direct and honest manner. He keeps refusing to answer our replies to his tweets and continues to distort and misinform - to put it mildly - and persistently tries to make the issue about something else. We will offer no further replies.

Please refer to our first article on top of this page, as well as our response to his 7 comments [viewtopic.php?p=4475#p4475 ] for an overview of the real issue: Perrott misrepresenting the results of a landmark study on the effects of fluoride on thyroid function in children living in areas of iodine deficiency.