In the years between 1930 and 1960, when the "benefits" of fluoride upon caries were investigated extensively, almost all of the evidence showed that rodents required much higher fluoride amounts than humans to produce even a slight reduction in caries occurrence (McClure & Arnold, 1941; Wuthier & Phillips, 1959; Hodge & Sognnaes, 1946; Shaw et al., 1945; McClendon & Foster, 1941).

The amounts needed were often higher than those required to cause mottled teeth (dental fluorosis).

In addition, rodent studies showed that the effects of low fluoride were time-dependent.

When the same low dose of fluoride was consumed for extended periods of time, there was an INCREASE in caries at fluoride concentrations as used in Community Water Fluoridation programs, not a reduction (Wuthier & Phillips, 1959).

Overall, dental health got worse - not better - as time went on. 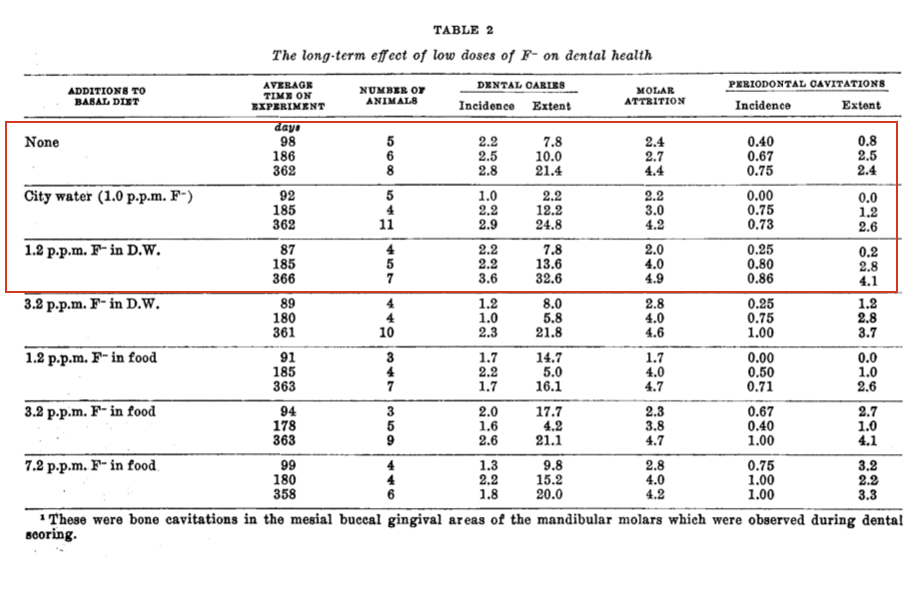 "No significant protective effect against dental caries was observed from any of these F~ levels studied. Earlier work demonstrated that 40 to 50 p.p.m. F- in the diet (Shaw et al., '45) or 20 p.p.m. F- in water (Hodge and Sognnaes, '53) were necessary to give a measurable reduction of caries in the rat." (Wuthier & Phillips, 1959)


Further, there was no real decrease in caries at all, it was merely a DELAY, at best. Long-term studies showed that caries was not arrested, only delayed (McClendon & Foster, 1941).

Hodge H, Sagnnaes, HR - “Experimental Caries and a Discussion of the Mechanism of Caries Inhibition by Fluorine,” in F. R. Moulton, ed., Dental Caries and Fluorine, Washington, DC: American Association for the Advancement of Science 53–73 (1946)